With its super-snowy microclimate and formidable expert terrain, Andermatt has long held a cult status among skiing aficionados. More leisurely skiers needn't be put off though, as the recent expansion of the gentler Nätschen sector (including links to Sedrun) means that Andermatt is now equally well suited to intermediates.

The resort has undergone radical change in recent years, with a luxury new development (incuding the world-famous Hotel Chedi) sitting in perfect harmony with the original village, yet opening the door to a wider international clientele.

Andermatt at a glance...

The big draw in Andermatt is still the Gemsstock, a cult mountain for expert and off-piste skiers, but which offers plenty of scope for adventurous intermediates too. From its 2965m summit there is over 900m vertical of gloriously open steep mountainside to Gurschenalp, including countless off-piste routes and itineraries.

There are a handful of easier runs around the mid-station area, but less confident intermediates may be better off on Andermatt’s other gentler mountain (Nätschen) which is now linked to the resort of Sedrun. This development has also added several new lifts and pistes, which has greatly increased the appeal of Andermatt for intermediates.

Andermatt is now a much better resort than it once was for novices, with a new beginners' and children's area at the top of the Nätschen lift.

Andermatt is undergoing radical new development with the construction of a brand new resort complex that will eventually include six luxury hotels, over 500 villas and apartments and numerous shopping, sports and recreational facilities.
The project is welcomed by the locals and the original old village will continue to offer a more rustic alternative.

Our hotels in Andermatt 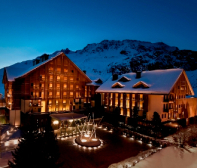 * State of the art leisure facilities

Andermatt is located in the canton of Uri in the central southern Swiss Alps.

See our other resorts in Switzerland

* Guide prices are based on a departure in low season and include flights, private transfers and 3 or 7 nights accommodation on a B&B basis.