*  Extensive varied slopes for all levels...

*  Perfect base for mixed abilities...

Les Arcs is the collective name for four distinct purpose built centres that make up one of France’s biggest and best ski areas. Our accommodation is situated in Arc 1950 and Arc 2000, the two highest, most snow-sure and convenient of the villages.

The resort's varied slopes include some of the most testing runs in the French Alps but are excellent for all levels, and even extend over to La Plagne, offering a total of 425km of pistes.

Arc 1950 is the newest and most attractive of Les Arcs' main purpose-built resorts. It also has an exceptional snow record, thanks to its position in a high north-facing bowl that it shares with Arc 2000.

Arc 2000, as its name suggests, is even higher than Arc 1950, connected by a short lift. If anything it has even more direct access to the area's vast array of slopes.

Les Arcs has a vast network of slopes that caters superbly for all levels of skier. Those looking for some challenge have plenty of steep terrain at their disposal, whilst intermediates of all levels will delight in the extent and variety of pistes on offer – not just in Les Arcs, but in the whole Paradiski (which includes La Plagne).

Les Arcs is also home to one of our favourite runs in the Alps, the 7km descent from the glacier on the Aiguille Rouge, all the way down to Villaroger some 2000m vertical below.

Complete beginners are well catered for on the nursery slopes of Arc 2000 (accessible via a short lift from Arc 1950) and the area has some good easy runs to progress to.

Only fully completed in 2008, Arc 1950 is a new generation purpose-built resort that has been designed to resemble a miniature Alpine village. It has proved highly successful and is now by far the most attractive base from which to explore Les Arcs' world class slopes.

Although very compact, the "village" square is quite lively at the end of the day and the resort is not devoid of nightlife. This is not, however, a resort that we would particularly recommend for non-skiers.

Just above Arc 1950, Arc 2000 is a classic 1970's purpose-built ski resort that is moving steadily upmarket with the arrival of a string of new luxury hotels and apartments.

Overall, Arc 2000 is the most convenient of the resort's different centres, and home to its best nursery slopes. Like Arc 1950, however, this is not a resort that we would recommend for non-skiers.

Our accommodation in Les Arcs 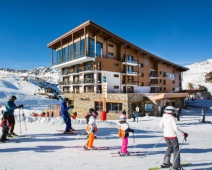 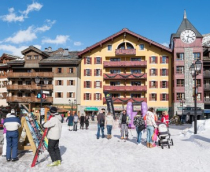 Les Arcs is located in the Savoie region of the northern French Alps.

See our other resorts in France

Guide prices are based on a departure in low season and include flights, private transfers and 3 or 7 nights accommodation on a *half board or **self-catering basis.