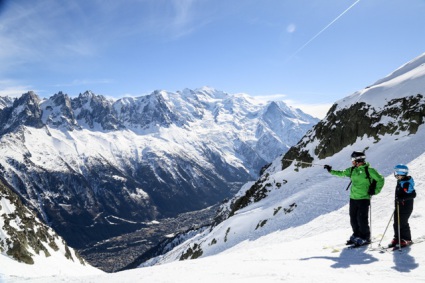 Chamonix is a truly unique ski resort. Nestled beneath the highest mountains in the Alps, yet just one hour from Geneva, it offers some of the toughest, wildest and most exhilarating skiing anywhere in the world.

The town also pulsates with life, making it an ideal ski resort for adrenaline junkies looking for a high-octane short ski break, or holiday-makers who are looking for entertainment both on and off the slopes.

Chamonix sits at the foot of Mont Blanc, in the department of Haute-Savoie in the northern French Alps, just one hour’s drive from Geneva.

Chamonix is a sizeable town, steeped in mountain tradition and spectacularly set beneath the highest peaks in the Alps.

Its vibrant traffic-free centre is captivating, if a little touristy, and the resort offers an unparalleled range of non-skiing activities. 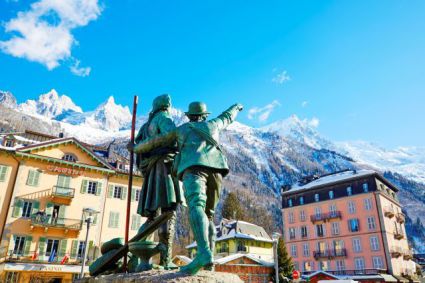 Chamonix’s ski area is split into several distinct sectors, two of which are directly accessed from the town itself, the rest being a short drive further up and down the valley.

Close to the resort centre, a spectacular two stage cable-car takes you to the top of the 3840m Aiguille du Midi, where you can get up close and personal with the peaks and glaciers of Mont Blanc.

This is also the start of the 22km Vallée Blanche route - perhaps the most famous off-piste ski run in the world. Note that there are no marked or patrolled pistes in this area, so a guide is essential. 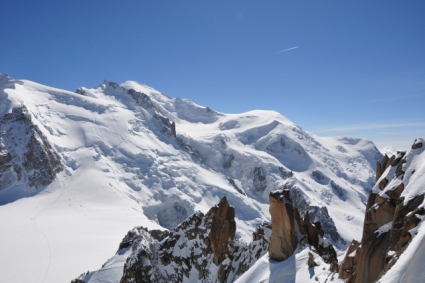 The only other major ski area accessible from town is Le Brévent, a steep walk or short drive from the town centre. Le Brévent is linked to the La Flégère sector, which is also accessible by cable-car a couple of kilometres up the valley.

These two areas offer a good variety of open slopes with fabulous views of Mont Blanc but from which, depending on snow conditions, you sometimes have to take a lift back down to the valley. 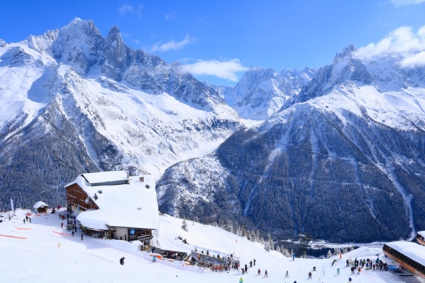 The most famous ski mountain in the Chamonix area is Les Grand Montets, 9km up the valley above the traditional village of Argentière.

Not only does this area offer the toughest skiing that Chamonix has to offer (both on and off-piste), but it also frequently has the best snow. 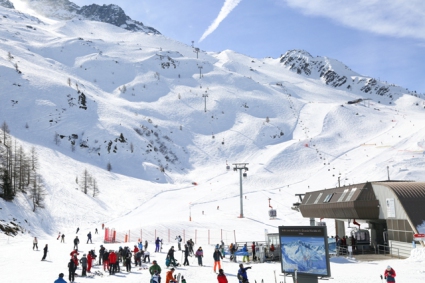 Beyond Argentière, at the north-eastern end of the valley, is the small village of Le Tour, whose skiing offers a gentler mix of open bowls and woodland glades which are also linked to another village, Vallorcine.

On the other side of Chamonix at the south-western end of the valley is the Les Houches sector, home to the Kandahar world cup downhill. This is a good area for mixed abilities, with most of the easier skiing higher up, and some longer, steeper runs through the trees back to resort.

Snow cover can be patchy lower down in Chamonix, but most of your skiing time will be spent at high altitude, where snow conditions are generally reliable.

With its north-facing slopes reaching almost 3300m, Les Grand Montets has a particularly good snow record and is open until early May. This end of the valley is also a known ‘snow-pocket’, with nearby Le Tour claiming to be the snowiest village in France. 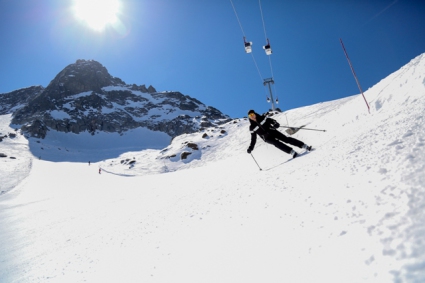 Where to find the best snow in Chamonix

The best snow quality in Chamonix is nearly always above the mid-station on Les Grand Montets.

Later in the season, watch out for rapidly changing snow conditions on the Brévent and Flégère mountains, where many of the slopes face south

If you are planning to cross the border into Italy (via the Mont Blanc tunnel) and ski in Courmayeur, note that snow and weather conditions can be very different on that side of Mont Blanc to how they are in Chamonix.

Les Houches is by far the best area to head to in the Chamonix valley in bad weather as it has the lion’s share of trees. However, as this sector can get very crowded in poor visibility, you might also want to consider travelling to Megève (30 minutes away by car), which offers a huge amount of wooded terrain.

Chamonix is one of the best ski resorts in the world for experts. Much of the best advanced and expert terrain is on the Grand Montets mountain, home to two exhilarating black runs, the Pointe de Vue and Pylônes, as well as countless off-piste routes.

The Aiguille du Midi cable-car also accesses a number of epic off-piste runs, including the famous 22km Vallée Blanche route which is manageable (with a guide) by confident intermediates.

You will also find plenty of challenge (mostly off-piste) in all the other main ski areas, especially on Le Brévent.

Chamonix has plenty of options for intermediate skiers, especially those with a sense of adventure.

The toughest runs are generally to be found at Les Grand Montets and Le Brévent, while more leisurely intermediates will better appreciate La Flégère, Le Tour and Les Houches.

Depending on what lift pass you have you might also want to visit Courmayeur (in Italy), Les Contamines and Megève, the latter being particularly good for skiing in bad weather due its huge number of trees. 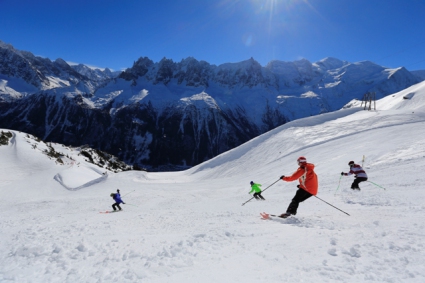 While Chamonix may not be ideal for beginners, it does have a number of adequate nursery slopes scattered around the valley, the best of which is Le Savoy at the bottom of the Brévent lift.

Once off the nursery slopes, however, there are few obvious “progression” runs, with the gentlest options being at Le Tour, 12km up the valley. 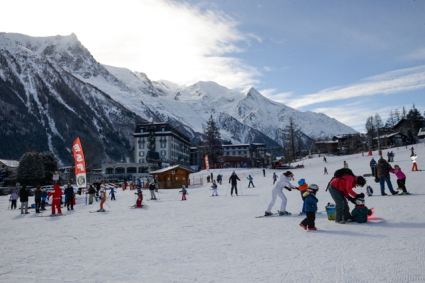 There are more than 50km of cross-country skiing trails in the Chamonix valley, mostly located between Chamonix and Argentière, though snow reliability can be an issue early and late in the season.

Among our favourite mountain restaurants in Chamonix is the Bergerie de Planpraz on Le Brévent – attractively built in wood and stone with pricey yet reliably good food and a panoramic sun terrace.

Also recommended is the Plan Joran close to the Grand Montets mid-station, and the Crèmerie du Glacier on the home run just above Argentière. 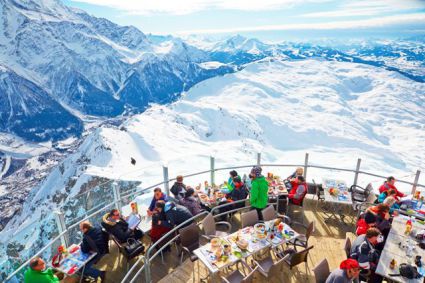 Chamonix is an excellent choice for non-skiers with a wide range of off-slope activities available.

Most obvious among these is the spectacular Aiguille du Midi cable-car ride that whisks you up to over 3800m beneath the gaze of Mont Blanc, the highest mountain in the Alps. Almost as mesmerising is the Montenvers mountain railway which allows you to visit the famous Mer de Glace glacier.

The town of Chamonix also has plenty to offer including dozens of shops, bars and restaurants, an ice rink, sport-centre, 1.3km dry toboggan run, an Alpine museum and a library. There are also plenty of snow-shoeing and winter walking routes around the resort. 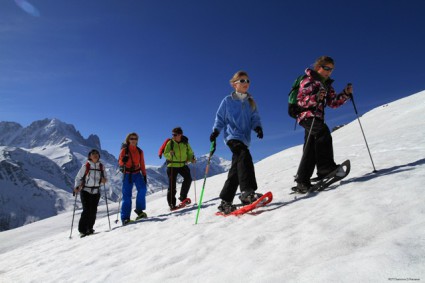 Chamonix is a lively resort by French standards, with plenty of options to suit most tastes and pockets. Being a large town, however, venues are quite scattered and it pays to know where to go.

A long time-favourite is the Chambre Neuf bar near the station, which is very lively shortly after the lifts close. The MOÖ bar on Avenue Michel is another lively option, with live music.

In the heart of the pedestrian zone, The Pub gets packed with Brits, while nearby La Terrasse (of ‘Blizzard of Aahhh’s’ fame) is ever popular with tourists and locals alike.

For something a bit more relaxed you could try the rustic-chic Le Privilège or the upmarket QuartzBar in the Hameau d’Albert 1er.

Chamonix also has several nightclubs, the biggest of which is Amnesia close to the Aiguille du Midi cable-car. 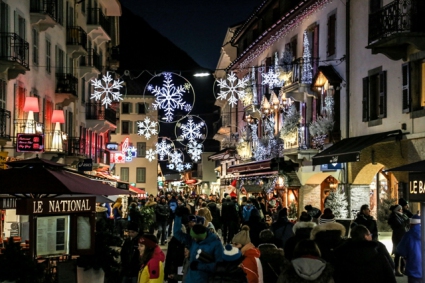 Eating out in Chamonix

Chamonix has a huge range of restaurants from simple huts to some of the finest dining in the Alps.

At the top end of the scale, both the Hameau d’Albert 1er and Auberge du Bois Prin hotels have restaurants with Michelin stars. For more mid-range traditional Savoyarde fayre, you could try cosy Le Monchu or ever popular La Calèche.

Other recommendations include L’Impossible, Atmosphère or, for burgers, the MOÖ bar.

Our accommodation in Chamonix

With more hotels than almost any other resort in the Alps, Chamonix has something to suit everyone and every budget.

We offer tailor-made luxury ski holidays at hotels across the resort, from the atmospheric 4 star Grand Hotel des Alpes in the heart of the historic pedestrianised centre, to the wonderful Hotel Les Grand Montets in the quieter village of Argentière, a few kilometres up the valley.

Prices in Chamonix start from £1225 per person for 7 nights or £845 for 3 nights, including flights, private transfers and breakfast.

A car comes in useful in Chamonix - the buses running along the valley are often overcrowded, and taxis are expensive.

Considering a luxury ski holiday
or short break in Chamonix?