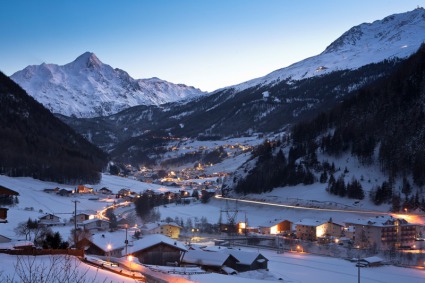 Sölden is undoubtedly one of Austria’s major league ski resorts with a large and loyal predominantly Germanic following.

What draws skiers here is its high, snow-sure and relatively varied ski area, which includes two glaciers and 150km of pistes. Sölden also benefits from being only a short transfer from Innsbruck, and having some of Austria’s liveliest nightlife.

Sölden is located in the Ötz valley in the Tirol province of Austra, just one hour south-west of Innbruck and 20 minutes’ drive from neighbouring Obergurgl.

Sölden is a large, traditional-style village which straddles the busy main road at the bottom of the long Ötz valley. While it is reasonably attractive, it is more commercialised than a stereotypical ‘cutesy’ Tirolean village, with more of a town-like atmosphere and some of Austria’s liveliest nightlife.

Sölden is relatively upmarket though, with several luxury hotels (including Das Central) tucked away off its main drag, where those looking for a less lively holiday can avoid Sölden’s legendary après-ski if they so choose. 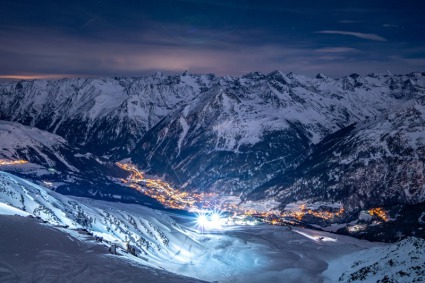 Sölden is one of the Tirol's larger and livelier ski resorts - Photo: Christoph Noesig

Unlike other Austrian ski resorts, Sölden offers a combination of both great glacier skiing and a large area of connected, entirely non-glacial terrain.

The ski area is split into three distinct but well-linked sectors, reached by fast gondolas from different points in the resort. At the eastern end, the Giggijoch sector offers a mixture of open bowls and some longer runs through the trees back down to resort. It is also home to the tiny satellite resort of Hochsölden and is usually the first non-glacial area to open each season. 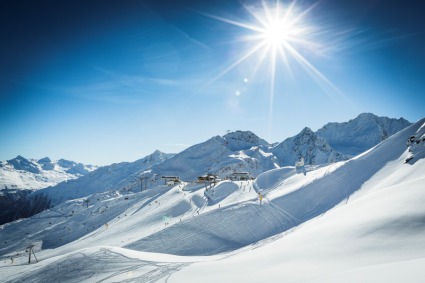 Directly above town, the Gaislachkogl area offers mostly open terrain, but also some wooded runs which wind their way back to the valley. Most of the pistes here are at mid-mountain level, although the area does offer a 1700m vertical descent back to resort from its 3058m summit.

Sölden’s third sector comprises the resort’s two glaciers, the Rettenbach and Tiefenbach, which are accessed via a series of lifts from the Giggijoch side of the ski area. 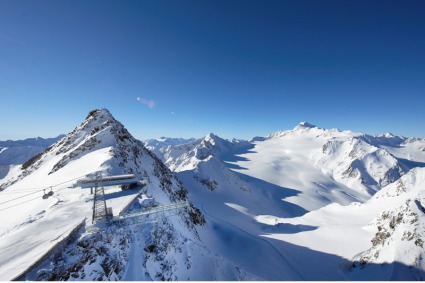 Sölden's two glaciers make it one of Austria's most snow-sure ski resorts. This is the top of the Tiefenbach glacier - Photo: Philipp Horak

Sölden may not be the snowiest ski resort in Austria, but it does have an excellent snow record thanks to the high average height of its ski area (for Austria) and having two good quality glaciers to fall back on. These permit skiing from as early as late September, while the non-glacial Giggijoch area is usually open by mid-November.

With 75% of the ski area covered by artificial snow-making, good snow cover can be expected here. If the area has one weakness, it is that the snow can often be thinner and patchier at resort level (1380m) than you might expect. Though, with most of the skiing located above 1800m, this isn’t really a major problem. 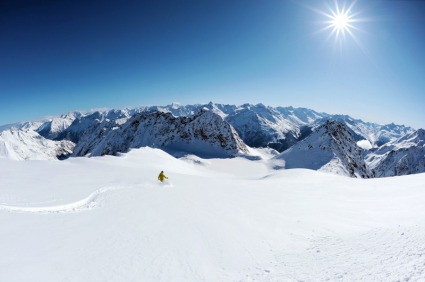 Sölden has an excellent snow record and one of the longest ski seasons in Austria - Photo: ötztal.com

Where to find the best snow in Sölden

As you might expect, the best snow in Sölden will almost certainly be found on one of its two glaciers, the Rettenbach and Tiefenbach.

Most of Sölden’s slopes sit above the treeline, although there are a handful of woodland runs that can offer shelter in bad weather. These are located below the mid-stations on both the Giggijoch and Gaislachkogl sectors.

Sölden may not be in the same league as St Anton when it comes to expert terrain, but it still has plenty to interest more advanced skiers, especially off-piste.

Of the half a dozen or so black runs, the no. 31 at the bottom of the Rettenbach glacier is probably the steepest, but the no. 14 on Giggijoch and no. 25 from Schwarzkogl are also good fun.

There are also plenty of off-piste possibilities, with some of the most serious routes coming off the Gaislachkogl. 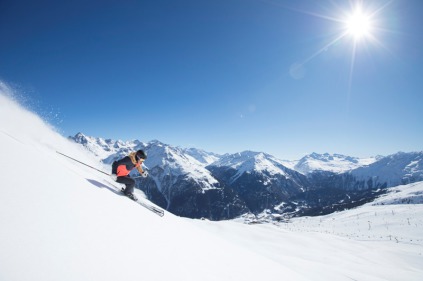 Sölden is best suited to intermediate skiers, with plenty to entertain both those who are more cautious and more adventurous.

All three sectors offer gentle cruising for more nervous intermediates, with Giggijoch as good as anywhere to find your skiing legs, with an array of easy blues. Just be aware that the run back down to resort from here is a bit more testing. The glaciers also offer easy, wide open terrain. On Gaislachkogl the blue runs are a little steeper, but generally less crowded than those on Giggijoch.

More advanced intermediates have lots of options to choose from, including the resort’s black pistes, few of which are really daunting. The area also has several long red runs, including the no. 11 from Rotkoglhütte into Rettenbachtal, and the no. 7 below that back to the village. 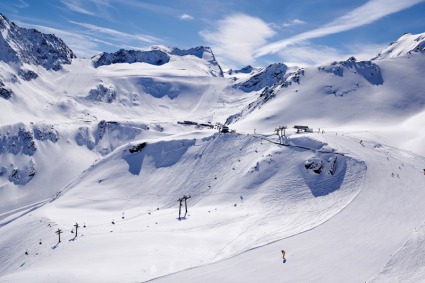 Sölden's glaciers offer lots of wide open terrain, which is great for intermediate cruising. This is the Rettenbach glacier - Photo: Anton Klocker

Sölden is a reasonable resort for beginner skiers, although Obergurgl (25 minutes up the road) is better.

The resort has two main areas of nursery slopes, the best of these located at Innerwald, just above the resort centre reached by lift. Here you will find an area of gentle uncrowded slopes served by drag lifts, covered by a special beginners’ day pass.

The other nursery area is located up the mountain at Hochsölden, which requires a more expensive lift pass covering the access gondola and another two chairs. One of these chairs, the Hainbachkar, serves a gentle but busy blue that is a good run for beginners to progress to. 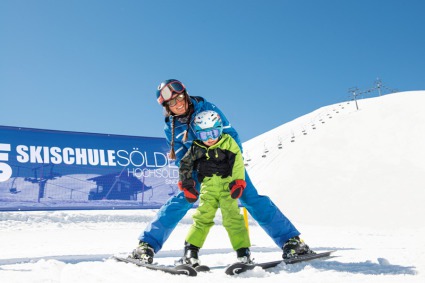 Sölden has two main beginner areas. This is the one up the mountain at Hochsölden - Photo: ötztal.com

There are 3 short cross country skiing loops in the valley, near to Sölden, but there are better resorts for cross-country skiers.

Sölden offers a good choice of mountain restaurants spread across its ski area. The most famous is the panoramic yet pricey ice Q at the top of the Gaislachkogl, with its floor to ceiling glass walls, which featured in the recent James Bond film SPECTRE.

For those looking for a more traditional on-mountain lunch, the Hühnersteign (below the Rettenbach glacier) and Eugen’s Obstlerhütte (just below Höchsölden) both come highly recommended. 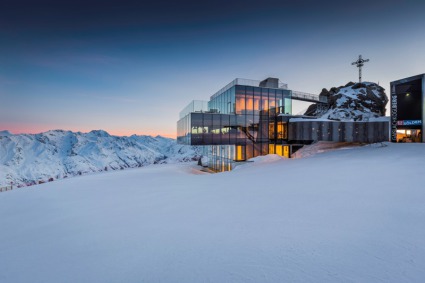 Sölden's newest and most well known restaurant is the ice Q, as seen in the James Bond film, SPECTRE - Photo: Rudi Wyhlidal

Sölden may not be one of the best resorts for non-skiers, but there is still quite a bit to do off the slopes. Its Freizeit Arena is a state-of-the-art leisure centre, with a swimming pool (with waterslides), tennis courts and bowling. There is also an ice-rink and several winter walks in and around the valley. 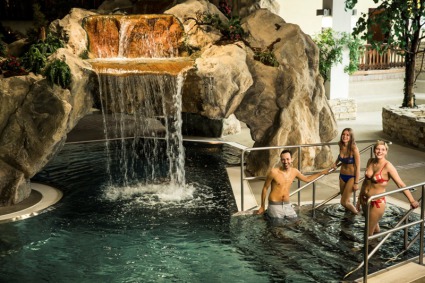 Back in town there are lots of options, many of them throbbing until late. Among the more popular spots are Fire & Ice and the circular glass-topped Schirmbar, near the bottom of the Giggijochbahn. 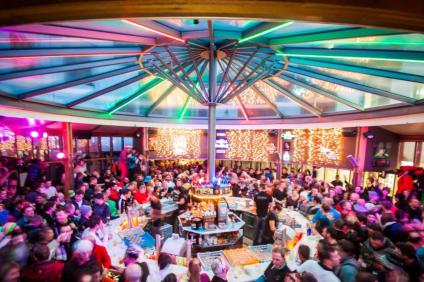 Sölden offers some of the liveliest après-ski in Austria. This is the Schirmbar - Photo: facebook.com/schirmbarsoelden

Eating out in Sölden

Most of Sölden’s best restaurants are found in its hotels, none better than the 2-Michelin star Ötztaler Stube in the 5 star Das Central.

The restaurant in the 4 star Hotel Bergland is popular for its fondues, as is the Hotel Castello for its steaks. If it’s just a pizza you are after though, you could try Gusto. 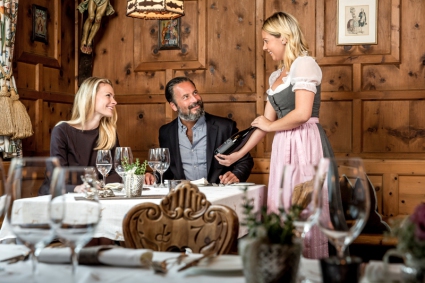 Our accommodation in Sölden

Sölden is a vibrant resort, with a diverse range of hotel accommodation including several four and five star luxury hotels. We offer tailor-made luxury ski holidays at Sölden's flagship 5 star hotel, the fabulous Das Central, which offers one of Austria's finest gourmet dining experiences. Prices start from £2095 per person including flights, private transfers and half board.

With its excellent snow record, Sölden is a great choice for an early season ski trip. Its glaciers open as early as late September, with its nonglacial Giggijoch sector usually following in late November.

Considering a luxury ski holiday
or short break in Sölden?