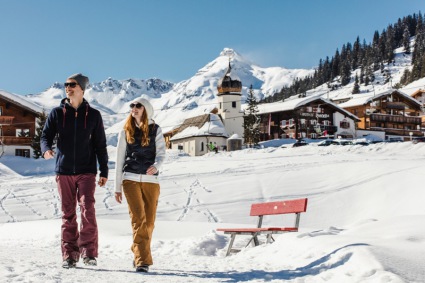 Lech is the prettiest and most upmarket of the villages that make up the vast Arlberg ski area in western Austria.

Lech’s extensive ski area is shared with Zürs, just 5km up the road, which is more of a mini-resort than a village and is dominated by a number of luxury four and five star hotels.

Lech and Zürs are located in the Vorarlberg province in the far west of Austria. The resorts are often described as being in the Arlberg region, a collective marketing umbrella for the villages of St Anton, Lech, Zürs and Warth-Schröcken, and several smaller satellite resorts.

Lech is a picture-postcard Austrian village with charming chalet-style buildings, a traditional onion-dome church and a beautiful riverside setting. The resort has an upmarket though not overly ostentatious feel which lends itself well to both couples and families. Although it is nowhere near as lively as nearby St Anton, the village has a vibrant atmosphere, especially at the close of play.

Zürs is not so much a resort as a large collection of luxury hotels some 5km from Lech, just below the Flexen pass. 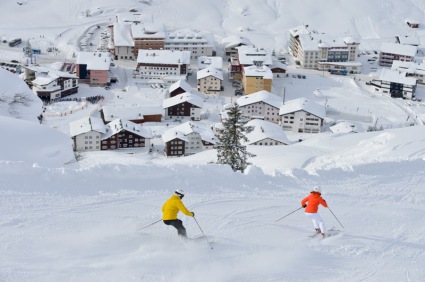 Lech’s two ski areas are located on opposite sides of the village. The main ski area (encompassing Oberlech) is accessible from both the village centre and lifts on the flanks of the resort, and offers a considerable area of mostly intermediate but highly varied terrain. At its north-western end it is also linked to Warth-Schröcken by gondola, but not by piste. 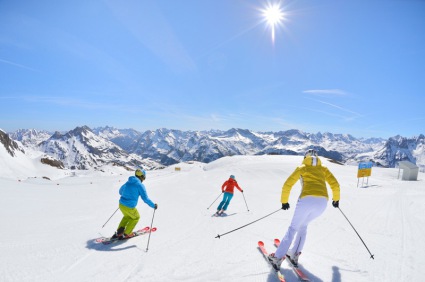 On the opposite site of the village centre, a two stage cable-car takes you to the slopes above Zürs, which is a more open but also sizeable ski area with a new gondola link towards St Anton (via Stuben). To return to Lech from Zürs you can either follow a ski route (manageable by confident intermediates) or take the bus. 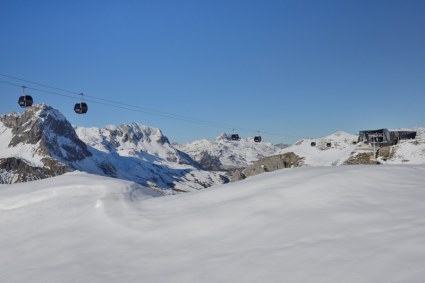 Lech and Zürs may not be among the highest ski resorts in the Alps but they are among the snowiest, with a seasonal snowfall average of around 7m in Lech, and closer to 10m in Zürs.

Snow-making here is also impressive, covering around 60% of all pistes, meaning that good coverage is virtually assured throughout the main part of the season. That said, much of Lech’s local terrain is south-facing, so snow conditions will generally be best in early to mid-winter, before the sun becomes too strong. 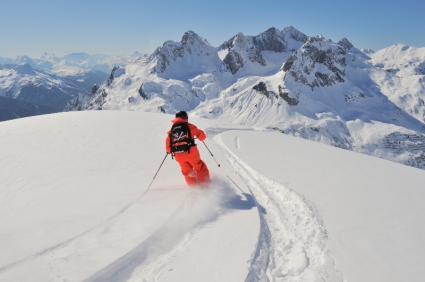 Where to find the best snow in Lech-Zürs

Locally the best snow in Lech is often found on the north-facing slopes between the Kriegerhorn and the bottom of the Steinmähder chair.

The shadier slopes between Trittkopf and Zürs are a good bet in warm weather or later in the season, as are the north-facing runs above Warth.

Lech’s ski area offers very little tree skiing and the options are therefore somewhat limited in a storm or poor visibility. Your best bet is to head to Oberlech and make use of the runs in a couple of glades there.

Lech and Zürs have few real challenges on-piste but plenty to amuse advanced and expert skiers off-piste. The area has a number of interesting ski routes (runs that are marked but not patrolled or avalanche controlled), many of which are accessed from the Steinmähder chair.

Other interesting areas for experts are the off-piste runs back down to Lech from the top of the Trittkopf and from the Madloch (above Zürs) towards Zug. The recent links to St Anton have also made its expert terrain much more accessible to those staying in Lech. 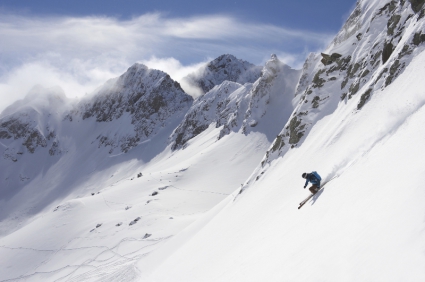 There is plenty of good off-piste to be found in the Lech-Zürs area.

The Lech/Zürs ski area is an intermediate’s paradise. For gentle cruising, the best runs are to be found above and around Oberlech, while stronger intermediates will enjoy the more demanding terrain served by the Steinmähder chair. There are also some excellent runs (with some challenges) on both sides of Zürs, the longest of which are on the Trittkopf side.

Further afield, adventurous intermediates will also want to explore the connected resorts of Warth-Schröcken, offering an additional 65km of terrain, and (as of 2017-18) world-famous St Anton, notable for its more challenging terrain. 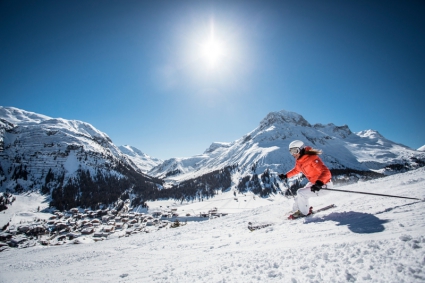 Lech is a particularly good resort for intermediate skiers.

Both Lech and Oberlech have excellent beginners slopes and also plenty of easy runs to progress to up the mountain, but beware of the main blue between Oberlech and Lech which is uncomfortably steep for near beginners.

Zürs also has adequate slopes for beginners, but fewer obvious options for runs to progress to. 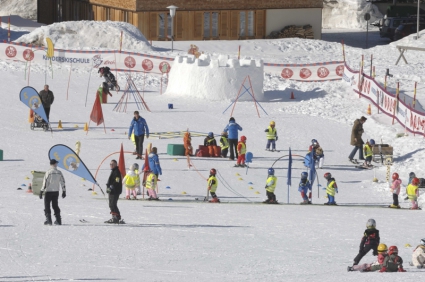 Lech has around 27km of cross country trails, including one of 21km track along the picturesque valley between Lech and Zug. There is also a 4km trail between Zürs and the Flexen pass. 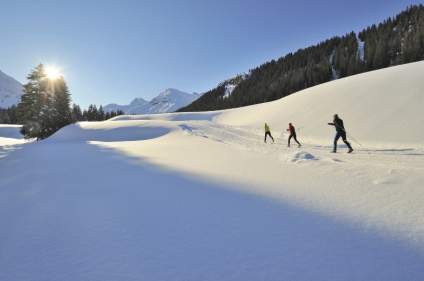 Cross country skiing in the scenic valley between Lech and Zug.

The quantity and quality of mountain restaurants in Lech has improved greatly in recent years, and there are now plenty of good options scattered across the area.

The luxury hotels in Oberlech (such as the Goldener Berg) remain popular, but you could also try the cosy Rud-Alpe just above Lech or the more modern steel and glass Schlegelkopf.

Over in Zürs, the Berghaus Seekopf has a huge terrace and a reputation for both good food and efficient service.

The Rud-Alpe is one of the most popular mountain restaurants in Lech.

Lech has a reasonable variety of non-skiing activities including winter walking and tobogganing (on the 1.2km run from Oberlech). There is also an impressive sports centre where you play tennis, hit the gym or ascend its indoor climbing wall.

Zürs has less to offer non-skiers, unless they are simply happy taking advantage of the excellent spa and leisure facilities in the numerous luxury hotels. 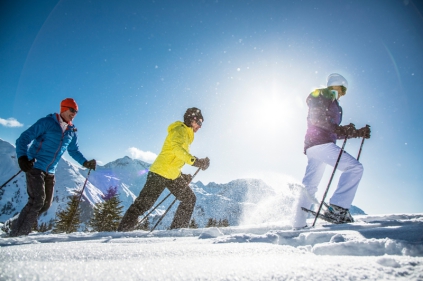 Snow-shoeing is one of the many non-skiing activities available in Lech.

Lech can be quite lively in the late afternoon/early evening when skiers pack the terraces of the central hotels such as the Krone and the Tannbergerhof. Later on, nightlife becomes more discreet with many guests choosing to retire to their hotels. However some clubs do continue into the early hours, including the Archiv and K.Club.

Zürs is very quiet in the evenings with nearly all entertainment confined to the various five star hotels.

The Eisbar at the Hotel Tannbergerhof is a popular après-ski spot in Lech.

Lech’s serious gourmet dining options are found in its top luxury hotels such as the Arlberg and the Schneider. For more mid-range options you could try the popular Schneggrei which does excellent pizzas. Fux is another good option with its mix of Asian-fusion and charcoal-grilled steaks. 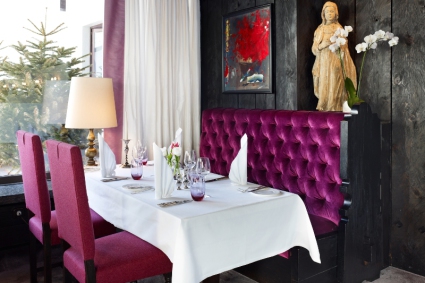 We offer tailor-made luxury ski holidays at six of its finest, ranging from the traditional charms of the 4 star Hotel Haldenhof to the intimate luxury of the 5 star superior Thurnher’s Alpenhof. Prices here start from £1495 per person including flights, private transfers and breakfast.

To warm up at the end of a hard day on the slopes, make sure you head to the Hotel Tannbergerhof's Eisbar for one of the best Glühweins in the Alps.

Considering a luxury ski holiday
or short break in Lech-Zürs?