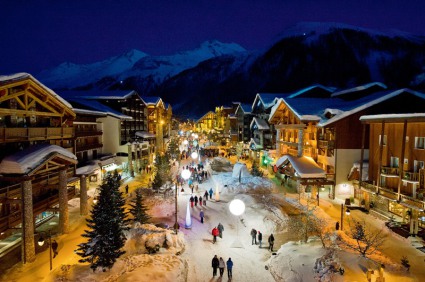 With its vast network of slopes, unparalleled snow record and vibrant village atmosphere, Val d’Isère is one of the true giants of world skiing.

The Espace Killy ski area, which Val d’Isère shares with neighbouring Tignes, has lots to offer all levels of skier and boarder but is best suited to experts and advanced intermediates, with some of the greatest lift-served off-piste in the Alps.

Where is Val d'Isère?

Val d’Isère is located in the east of the Savoie département in the northern French Alps, close to the border with Italy.

Val d’Isère is a large ski resort spread along a high remote valley, which becomes a dead end in winter with the seasonal closure of the Col d’Iséran.

The resort has several distinct villages, with the purpose-built satellite of La Daille at the lower end of the valley and the rustic hamlet of Le Fornet at the other, both of which have their own access into the ski area.

In between, the main resort of Val d’Isère is quite a hotchpotch of architectural styles but is a vibrant place to stay, with an attractive old village where you will find many restored farm buildings and a 17th century baroque church. 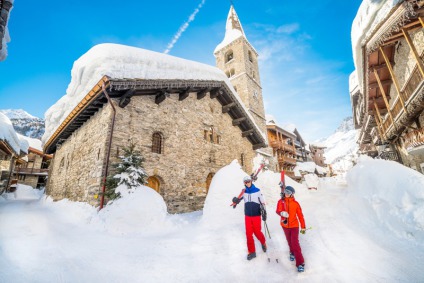 Val d’Isère’s part of the ski area (150km) has three distinct sectors, two of which – Solaise and Bellevarde - can be accessed directly from the centre of town. Bellevarde is also accessible from the purpose-built hamlet of La Daille and offers direct connections to Tignes. 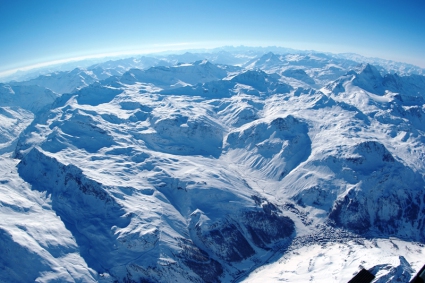 Val d’Isère’s third sector, Fornet, is accessible either from valley level at the hamlets of Le Fornet and Le Laisinant, or at altitude from Solaise. At the top of the Fornet ski area is the Glacier du Pissaillas which is also open in early summer.

All three ski areas tend to have most of their easiest skiing at altitude and their steepest terrain (on-piste at least) lower down.

Val d’Isère has one of the best snow records in the Alps. Altitude is key – the resort sits at 1850m, the top height (in L’Espace Killy) is an impressive 3455m and, most importantly, about 60% of the skiing is above 2500m. Also, unlike most French ski resorts, Val d’Isère benefits from significant snowfall from two different directions, both from the north-west, and from the east/south-east over the Italian border - the famous “Retour d’Est”.

Add to that a high proportion of north-facing slopes and the largest snow-making operation in Europe and it’s easy to see why Val d’Isère is considered such a snow-sure resort. 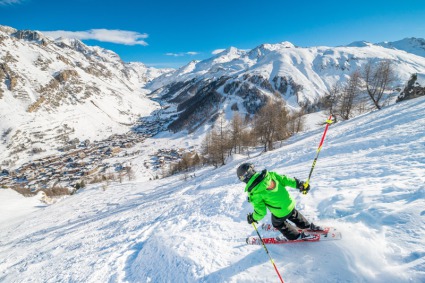 Val d’Isère has one of the best snow records in the Alps - Photo: Val d’Isère/ Andy Parant

Where to find the best snow in Val d'Isère

Val d’Isère does not have much shelter in the event of a storm, but three of its ski areas do have some trees lower down. The best place to head to in heavy snow or bad visibility is La Daille, above which there is about 400m vertical of lightly wooded slopes. However, you will have to ski some open terrain from the top of the gondola to reach it.

There are also some trees on the steeper lower slopes of both Fornet and Solaise but, once again, you will have to negotiate some open terrain before you get there.

Val d’Isère has a number of challenging black runs as well as some of the finest lift-served off-piste in the world.

Perhaps the best known on-piste challenge is the famous Face, which hosted the 1992 Olympic downhill and descends nearly 1000m vertical from the top of the Bellevarde into the village. It is often heavily mogulled, especially lower down.

However, the big draw for experts is Val d’Isère’s multitude of easily accessible off-piste opportunities, with countless routes in all sectors. One of the most popular for experienced skiers is the Col Pers, which starts on the Pissaillas glacier and drops down into the Gorges de Malpasset before finishing at the Fornet cable-car.

Another good option is the run from the top of the Cugnai chair which traverses a beautifully secluded bowl before ending up at the bottom of the Manchet lift. Tignes is equally appealing for advanced skiers and also has many off-piste options. Needless to say - always take a good guide! 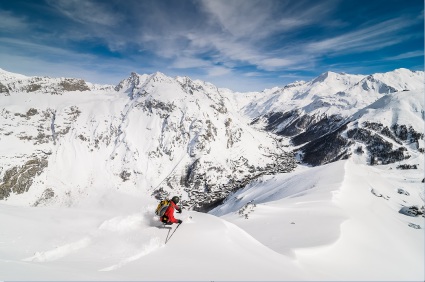 Val d’Isère has some of the best lift-served off-piste in the world - Photo: Val d’Isère/ Andy Parant

Not only is Val d’Isère a great resort for experienced skiers, but it is also an intermediate’s paradise with mile upon mile of pistes for all levels, and plenty of leisurely cruising.

Most of the easy intermediate terrain is found above the mid-stations, with the gentlest runs being either in the Fornet sector or beneath the Borsat chair on Bellevarde. On Solaise, the runs served by the Madeleine chair are also very straightforward. 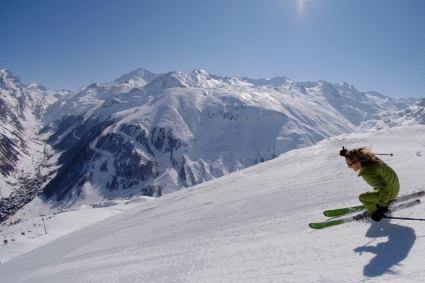 Adventurous intermediates are also spoilt for choice in Val d’Isère, with too many classic runs to list. Some highlights include the famous OK downhill red run from Bellevarde to La Daille, the long Laisinant red from Solaise to Le Laisinant, and the red from the top of the glacier to the bottom of the Cascade chair.

Don’t forget that neighbouring Tignes has just as much intermediate terrain again, the best of which starts on the Grand Motte glacier. 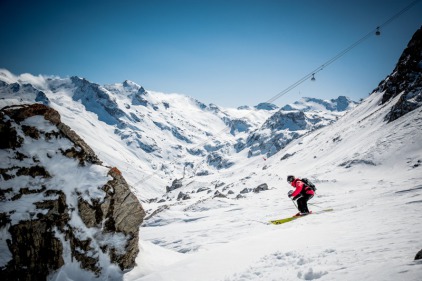 Val d’Isère is a much better resort for beginners than it is sometimes given credit for. There are two main areas of nursery slopes, one in the village and one brand new one at the top of the Solaise gondola.

There are also lots of gentle runs to progress to, though these are invariably on the top half of the mountain so you might need to take the lift back down at the end of the day if you want to avoid the tougher terrain at the bottom of the mountain. 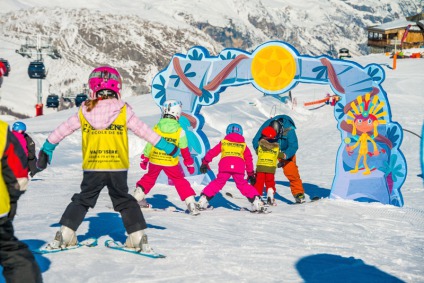 Val d’Isère has excellent beginner slopes both at resort level and up on Solaise - Photo: Val d’Isère/ Andy Parant

Val d‘Isère is not really a resort for keen cross country skiers, but it does have six loops (20km in total) mostly at resort level, the best and longest of which is in the Manchet valley. 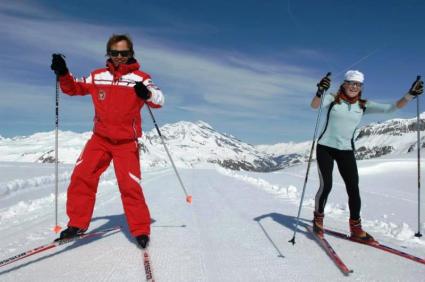 Val d’Isère has a number of snow-sure cross country trails.

Val d’Isère has a good choice of mountain restaurants spread across its ski area although they do get busy and you are strongly advised to reserve in advance.

On the Fornet side, the rustic Edelweiss comes highly recommended and has a splendid terrace for sunny days. Over on the Bellevarde side you could try the ever-popular Le Trifollet on the OK run to La Daille, or the more upmarket but quirky Fruitière at the top of the La Daille gondola, where you could also enjoy lively après-ski session at the infamous Folie Douce next door after your meal.

For something a little quieter, the Peau de Vache (between the two chairs on the Face de Bellevarde) is also highly rated and serves particularly good burgers. 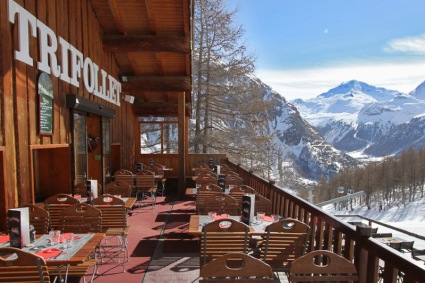 Le Trifollet, on the OK run to La Daille, is one of Val d’Isère's best mountain restaurants.

Val d’Isère has plenty to offer non-skiers including a sports centre with two swimming pools, an ice-skating rink and numerous winter activities including ice-driving, snow-shoeing and dog-sledding.

The village is also much more animated than most high-altitude French resorts with lots of enticing shops, cafés, bars and restaurants. 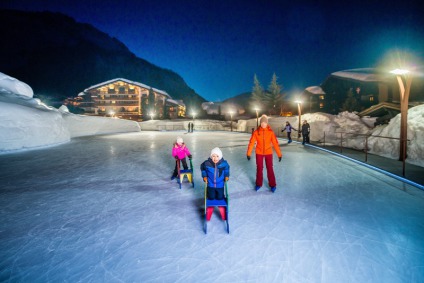 Val d’Isère is one of the liveliest ski resorts in France with a wide range of après-ski options.

Perhaps the most famous of all is the Folie Douce at the top of the La Daille gondola, which hosts lively (often raucous) parties from 3-5pm daily with live bands, DJs and cabaret. Coroico, at the bottom of Solaise, is a rival for late afternoon frivolities and almost as lively. 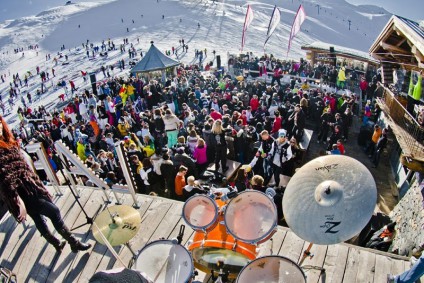 Val d’Isère has a lively après-ski scene. This is the Folie Douce.

More regular bar recommendations in Val d’Isère include Bananas, Pacific, the Morris Pub, the Saloon Bar and Victor’s, all of which are in the village centre. More upmarket options include the trendy La Baraque wine bar and the lounge-bar in the Hotel Le Blizzard – which may be expensive but is one of the cosiest ski hotel bars we have ever come across. 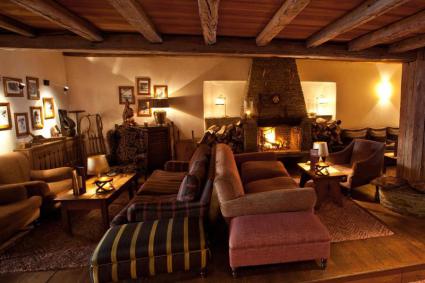 The cosy lounge-bar at the Hotel Blizzard.

Eating out in Val d'Isère

Val d’Isère has a huge number and variety of restaurants to choose from - at least 70 at the last count!

If it is Michelin stars you’re after, you should head to L’Atelier d’Edmond in Le Fornet or La Table de L’Ours in the five star Hotel Barmes de L’Ours. In the more mid-range price bracket Bar Jacques in the centre of town is highly recommended, as is the simpler but very friendly La Casserole.

Other recommendations include the Italian Casa Scara at the edge of the old village, and Chez Paolo for pizzas.

Our accommodation in Val d'Isère

Val d'Isère has a vast array of mid-range and luxury hotels spread throughout the resort. We offer tailor-made luxury ski holidays at some of its finest, all located in or near the centre of town, including the resort's original luxury 5 star hotels, Le Blizzard and Hotel Christiania, still as impeccably run as ever. We also offer the more recent and ultra-modern 5 star Avenue Lodge.

By way of 4 star hotels, we offer the quirky but highly-rated Hotel Ormelune and the more traditional, popular Tsanteleina.

In all of the sectors of Val d’Isère’s ski area, you’ll find the easiest skiing on the top half of the mountain. No matter which sector you are skiing in, it is also possible to take a lift back down to base if you don’t fancy the relatively steep runs back into resort.