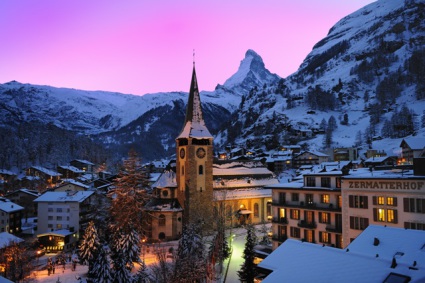 For many people, Zermatt is simply the best all-round ski resort in the Alps. With its extensive varied slopes, magnificent mountain scenery, fabulous snow and charming village base, not to mention its world-class mountain restaurants, vibrant nightlife and more non-skiing activities than you can shake a pole at, it’s easy to see why...

Zermatt is located in the south of the Valais (Wallis) canton in south-west Switzerland, close to the Italian border. Zermatt's ski area is linked with that of Cervinia, just across the border.

Zermatt may no longer be the simple farming community it once was, but it does retain a unique charm and vibrancy that draws a well-heeled international clientele back year after year.

Lined by quirky bars and luxury boutiques, its busy main street is the perfect place for an early evening promenade. Just off the main drag, however, you’ll find a maze of narrow streets and back alleys, many with century old wooden barns and chalets.

Early season is a particularly magical time to visit Zermatt - the air is crisp, the light is low and the snow covered streets are a hive of festive activity. 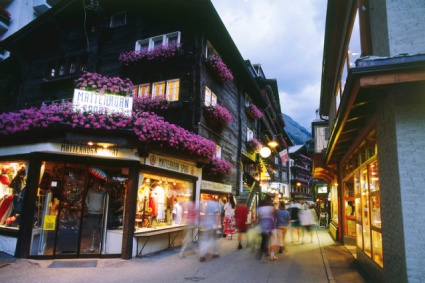 The diversity and beauty of Zermatt’s ski area is second to none. There are three main mountains, each with a distinct character of their own and enough to amuse most levels of skier for days on end. 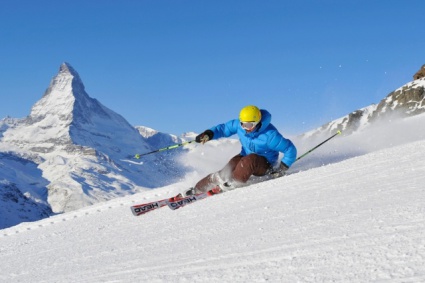 For the most classic (pyramidal) views of the Matterhorn, head for the Sunnegga-Rothorn area, home to one of our favourite pistes in the Alps, the Kumme. This wild and beautiful 5km red run plunges off the top of the Rothorn, and out of sight of the lift system, before emerging at the bottom of the Patrullarve chair.

The Gornergrat sector is also an intermediate’s paradise, but experts will be drawn to Triftji, home to some of the most epic bumps in the Alps. It can take until February for there to be enough snow for it to open - such is the rocky nature of the terrain – but for mogul connoisseurs, this is the stuff of dreams. 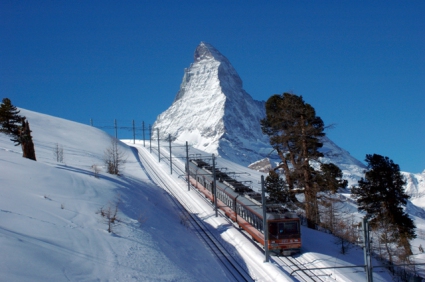 Zermatt's largest ski area is Schwarzsee-Klein Matterhorn with its cross border links to Cervinia. The glacier area at the top may be relatively flat, but it is fabulously scenic and offers a much more angular view of the Matterhorn. The snow here is also nearly always in pristine condition – these are the highest pistes in the Alps – and it is possible to ski all year round.

From the top of the Klein Matterhorn (3820m) you can ski all the way down to Zermatt in one fell swoop, a descent of 2200m - the biggest on-piste vertical drop in the Alps. 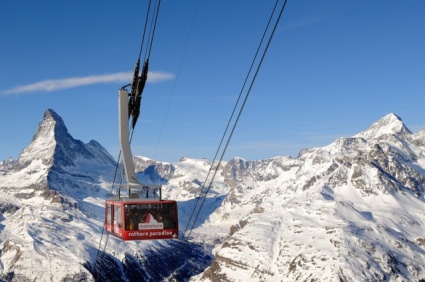 Not only does Zermatt boast the highest piste in Europe at 3820m (3899m in summer), but all of its three main ski areas also top 3000m, with lots of shady north-facing runs and extensive snow-making to boot.

Granted, Zermatt doesn’t have the highest snowfall average in the world but any snow that does fall tends to stick around and, in the middle to latter part of the season, there are few more reliable resorts for snow in the Alps.

Where to find the best snow in Zermatt

The Klein Matterhorn sector usually has the best snow in the Zermatt area, especially above Trockener Steg which is mostly glacier. Note that Cervinia also has lots of high altitude skiing and sometimes offers better snow conditions.

Zermatt doesn’t offer many trees in the event of a storm but there are a few wooded runs on the lower slopes, the best of which are on Sunnegga.

Zermatt is an excellent resort for expert skiers with lots of challenges in all sectors. Note that there are very few blacks per se, with many of the steeper runs classified as ‘Itineraries’ (yellow on the piste map) which are marked and avalanche controlled but not patrolled. Itineraries aside, there is also plenty of off-piste on offer, including one of the biggest heli-skiing operations in the Alps.

Some recommended itineraries include routes 16 and 17 from the top of the Rothorn with fabulous views across Zermatt. For mogul lovers, head towards Stockhorn where long steep bump runs drop nearly 1000m vertical towards Gant. 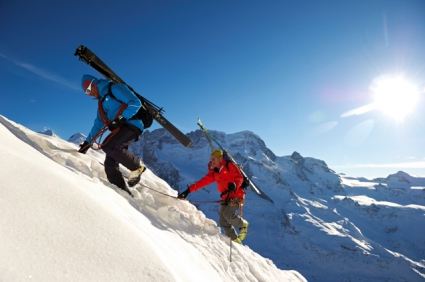 Zermatt is an intermediate’s paradise with long and varied runs in all sectors. The easiest cruising (and often the best snow) is on the Klein Matterhorn glacier, but there are gentle options above Riffelberg too.

More adventurous intermediates will delight in the long Kelle and White Hare reds from the top of Gornergrat and Hohtälli respectively as well the Kumme from the top of Rothorn. All three of these runs get you well away from the lift system and offer magnificent views.

Don’t miss the runs around Schwarzsee either – these are right beneath the Matterhorn but often less crowded. 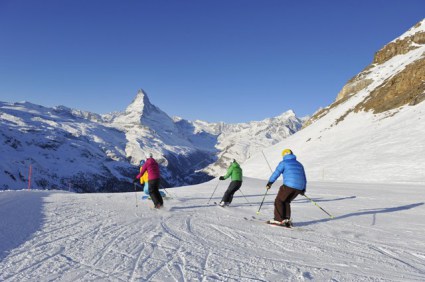 Zermatt has beginner areas in all three of its main sectors but the best by far is at Lesse, just below Sunnegga where there are three moving carpets and two rope tows reached by a short funicular.

Note, however, that there are no nursery slopes in the valley and that the best progression runs are rather dotted around, above Riffelberg and at the top of the Klein Matterhorn. 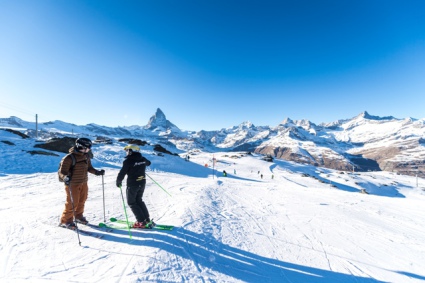 Cross country skiers should take the ten minute train ride down to Täsch, where there are 25km of trails. 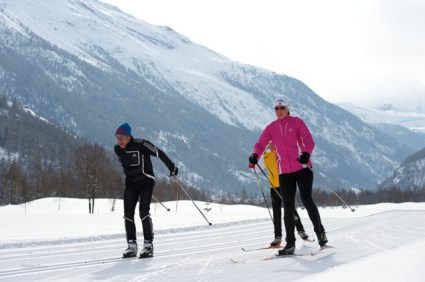 Zermatt’s mountain restaurants are simply the best in the Alps. Granted, it helps if you have deep pockets, but for those who take lunching on the mountain seriously, Zermatt is second to none.

One of our favourites is Chez Vrony in the rustic farming hamlet of Findeln. Here you can gaze at the Matterhorn all afternoon from the comfort of your sofa on the immense south-facing terrace. The nearby Findlerhof (AKA Franz and Heide’s) also comes highly recommended – wonderfully atmospheric inside when holed up in a storm.

We also love Zum Zee (just below Furi), which offers an equally charming but altogether more sophisticated dining experience, and the ever popular Stafelalp at Schwarzsee.

Two simpler recommendations are the Gandegghütte above Trockener Steg and the Alphitta at Riffelalp. 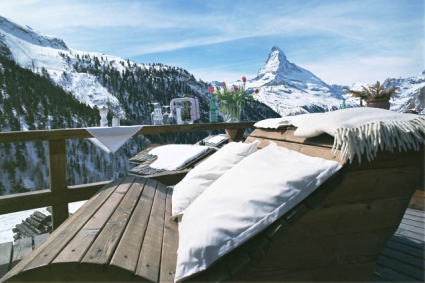 Zermatt is one of the best resorts in the Alps for non-skiers. To start with, it is very easy for pedestrians to get up the mountain and meet skiers for lunch in any number of attractive mountain restaurants.

There is also mile upon mile of beautiful winter walking, both close to the village and at altitude, as well as the opportunity to take a spectacular cable-car ride to the top of the 3840m Klein Matterhorn, with its viewing platform and ice grotto.

Zermatt itself also has lots to offer including numerous interesting shops, bars and restaurants, an ice-rink, cinema and Alpine museum. 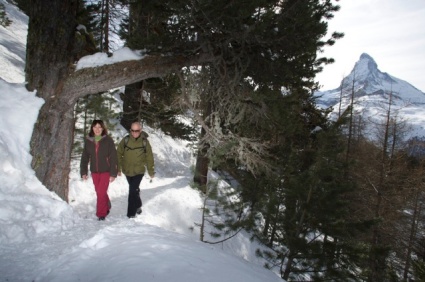 Zermatt has a wide range of après-ski options to suit most tastes, ages and paces!

The Hennu Stall below Furi is loud and lively and a great place for a quick drink on your final descent into town. Other piste-side recommendations include the charming Othmar’s Skihütte and the Cervo bar, both on the way back from Sunnegga. 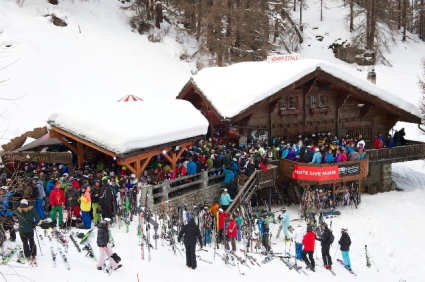 In the centre of town the Papperla Pub is ever-popular at the close of play, while the charming Elsie’s Bar attracts a more mature, sophisticated crowd, both early and late in the evening.

Other recommendations include the bars at the Hotel Alex and Hotel Pollux while Grampi’s and the Schneewittchen nightclubs are ideal for late-night revellers. 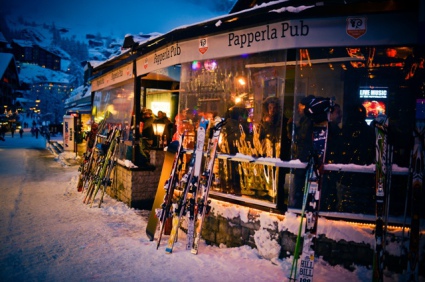 Eating out in Zermatt

Zermatt has a huge choice of restaurants including Michelin-starred establishments such as Capri (at the Hotel Mont Cervin) and After Seven.

Other recommendations include the restaurant at the eccentric but ever reliable Hotel Alex and the Schwyzer Stübli, where the set-menu changes daily. 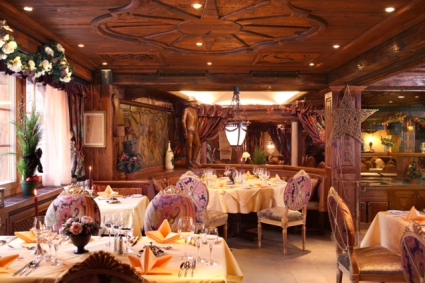 The 'Alex Grill and Bodega Bacchus' at Zermatt's Hotel Alex

Keep a close eye on the weather if you are skiing over in Cervinia, as high winds can lead to closure of the links back into Switzerland. Talk to the piste patrol or lift attendants if in any doubt.

Considering a luxury ski holiday or short break in Zermatt?

See our hotels in Zermatt