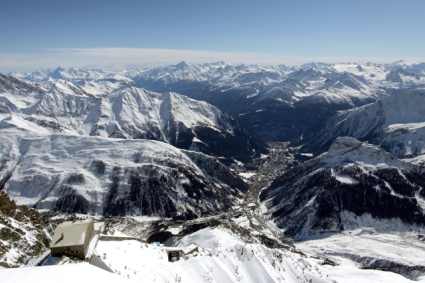 Magnificently set at the foot of Mont Blanc, and steeped in mountain tradition, Courmayeur is one of Italy’s best known and most picturesque ski resorts.

Courmayeur is in the upper Aosta valley in the far north-west of Italy, very close to the French border. Chamonix is just 25 minutes away through the Mont Blanc tunnel.

Courmayeur is a historic mountain village with a traffic-free centre, complete with narrow cobbled streets and an enticing array of boutiques, bars, cafés and restaurants.

As a genuine year-round resort, Courmayeur has a lively lived-in feel, especially at weekends when an influx of visitors from Milan and Turin add to the vibrant atmosphere.

Courmayeur has a number of suburbs and satellite villages, including Entrèves, a sleepy but equally charming outpost with its own lift access both into the main ski area and up the shoulder of Mont Blanc. 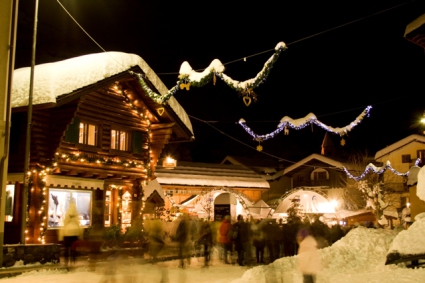 For a relatively compact ski area, Courmayeur packs in a lot of variety as well as offering magnificent views of Mont Blanc. The main ski area, accessed both from town and at two points further up the valley, has a good mix of open slopes (on the Plan Checrouit side) and trees (on the Val Venis side).

Most of the pistes are of intermediate difficulty, but there is also a huge amount of easily accessible off-piste (always take a guide). The Helbronner cable-car up the side of Mont Blanc is for sightseers, serious off-pisters and ski tourers only. 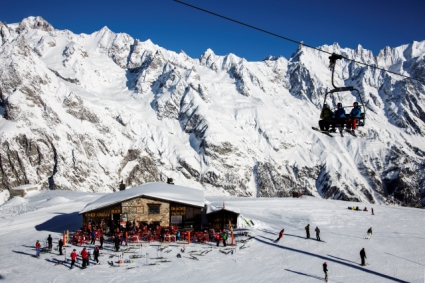 Sheltered by Mont Blanc from the worst excesses of mild Atlantic winds, and with plenty of artificial help, Courmayeur has reliable snow cover for most of the season.

Where to find the best snow in Courmayeur

The north-facing Val Veny side of Courmayeur's ski area offers the best snow conditions later in the season, when slush starts to become more of an issue on the south-east facing Plan Checrouit side of the mountain.

The two wide easy runs served by the high Bertolini chair often have the best snow on the mountain, regardless of season.

In bad weather, head towards the Val Veny side of Courmayeur's ski area where there are plenty of trees for shelter.

The Courmayeur ski area has four short black runs on the Val Veny side of the mountain, which are sometimes mogulled.

However, most of the resort’s appeal for expert skiers is in its off-piste. There are numerous routes, both in and around the main ski area and on the shoulder of Mont Blanc. Some of the most classic off-piste routes start at Cresta d’Arp and descend around 1500m to the valley floor. 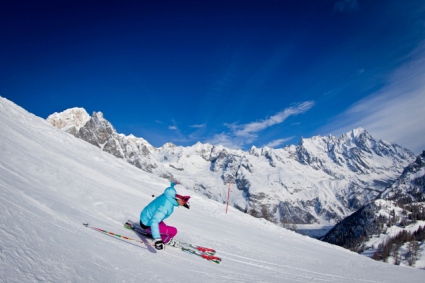 Courmayeur’s piste network is nearly all of intermediate difficulty. More cautious intermediates will appreciate the gentle blues through the trees on the Val Veny side of the area, as well as the open runs below the high Bertolini chair.

More adventurous intermediates can tackle the short black runs or consider some of the easier off-piste options (but a good guide is always recommended). 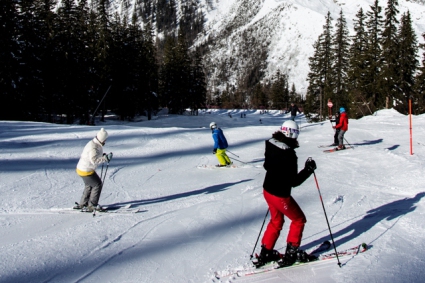 Courmayeur has nursery slopes up the mountain at Plan Chécrouit and Pre de Pascal (above Entrèves).

However, with few obvious confidence-building runs to progress to, this is not a resort we especially recommend for beginners. 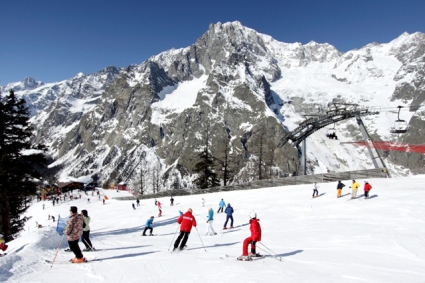 Courmayeur is a good choice for cross country skiers, with 35km of scenic valley level trails. The best cross-country runs are in the Val Ferret, a short bus or car ride from Courmayeur. 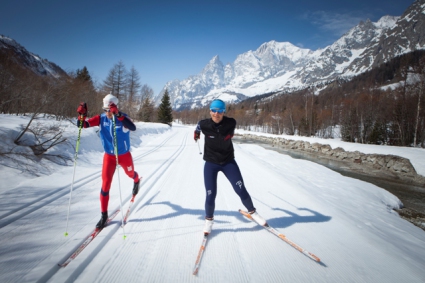 Lunch-time gourmets are spoilt for choice in Courmayeur, which has some of the best mountain restaurants in the Alps.

Most famous of all is the Maison Vieille which offers traditional Italian cuisine in a rustic setting. Another highly recommended mountain restaurant is Chiecco just above Plan Chécrouit, a deceptively simple hut with outstanding food and service.

On the Val Veny side of the mountain, La Grolla and the Petit Mont Blanc are also excellent, but there are other fabulous options almost everywhere you look. 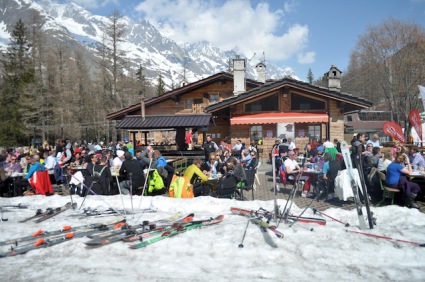 Courmayeur is a good choice for non-skiers. Not only is the village a delightful place for an amble, with its array of bars, shops and restaurants, but many of the mountain restaurants are also accessible to pedestrians via the Plan Chécrouit cable-car.

Courmayeur also has an excellent sports centre, albeit without a pool, but the famous thermal baths at Pré-Saint-Didier are just 6 km down the valley. 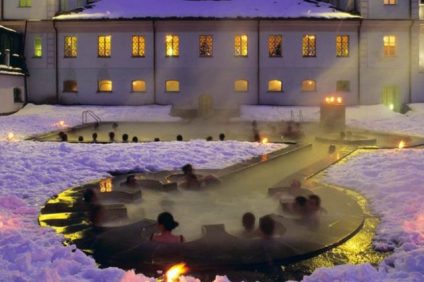 The thermal baths at Pré-Saint-Didier

Most of Courmayeur’s après-ski revolves around its sophisticated bar scene. You can start up the mountain at the Super G, but two village favourites are Bar Roma and Le Privé, both of which offer tempting free canapés early in the evening. The back room at Caffè della Posta is also recommended.

For those who have the stamina, there three nightclubs in Courmayeur, the best known of which is the trendy Courmaclub.

Eating out in Courmayeur

Courmayeur has a huge choice of restaurants to suit all tastes and pockets. At the gourmet end of the spectrum is La Clotze in Val Ferret (a few kilometres up the valley), which is rightly regarded as one of the best in the area.

In the resort itself, the Cadran Solaire and Al Camin also come highly recommended. Not surprisingly there are also a number of less formal pizza type places in town, including the jolly La Terrazza and La Piazzetta.

Our accommodation in Courmayeur

Courmayeur has a wealth of hotels to suit all tastes and budgets. We offer tailor-made luxury ski holidays at three of its most charming.

In the centre of Courmayeur, you can choose from the rustic chic Hotel Gran Baita with its fabulous pool and spa, or the atmospheric Hotel Berthod right in the heart of the resort. We also offer the delightful Hotel Pilier d'Angle in the hamlet of Entrèves, with its direct lift connection into Courmayeur's ski area.

Prices in Courmayeur start from £945 per person for 7 nights or £795 for 3 nights, including flights, private transfers and breakfast.

To avoid any weekend queues at the main village cable-car, head to either the gondola at nearby Dolonne or the cable-car up the valley at Entrèves.

Considering a luxury ski holiday
or short break in Courmayeur?