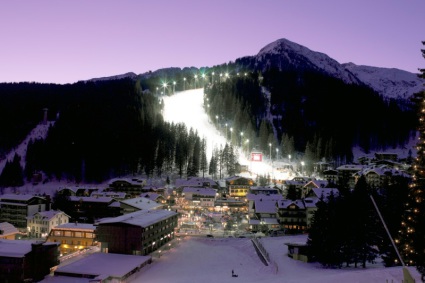 Spectacularly set beneath the high peaks of the Brenta Dolomites, Madonna di Campiglio is one of Italy’s most fashionable ski resorts, vying with both Cortina d’Ampezzo and Courmayeur for the attention of the Italian glitterati.

While Madonna may be upmarket, it does also offer excellent value for money (at least by French or Swiss standards) and is particularly appealing to families, with its scenic, wooded and easily navigable slopes, all served by a state-of-the art lift system.

Where is Madonna di Campiglio?

Madonna di Campiglio is located in the Brenta Dolomites about 2hrs to the north-west of Verona.

Madonna di Campiglio is a large but traditional alpine village magnificently set beneath the towering peaks of the Brenta Dolomites. The resort’s pedestrianised centre has an interesting array of bars, restaurants and boutiques and is a popular place for a late afternoon or early evening stroll.

Unlike most of the Dolomites (the Süd-Tirol, where the Germanic influence is strong) Madonna di Campiglio is unequivocally Italian with a relaxed and quietly upmarket atmosphere that attracts well-heeled Italian and international visitors alike. 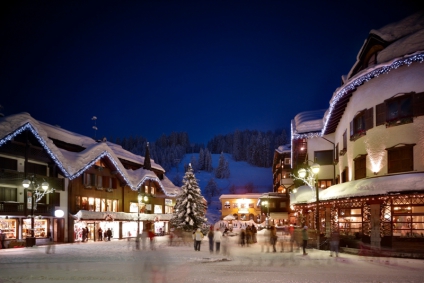 Madonna di Campiglio’s ski areas are connected by lift and piste on the outskirts of the village.

The largest ski area is Cinque Laghi-Pradalago-Monte Vigo which offers a dense network of pistes both above and below the tree-line. This area is also connected to the neighbouring resorts of Folgarida and Marilleva. 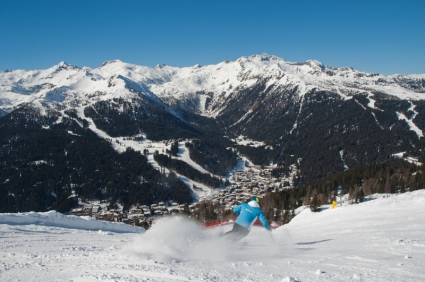 On the other side of the valley is the smaller but higher Spinale-Grostè area, again offering a good mix of wooded and open slopes.

Madonna di Campiglio is also connected by lift (but not by piste) to the resort of Pinzolo down the valley, which has a separate but very worthwhile ski area of its own.

Weather patterns are a little erratic in the Brenta Dolomites, but the area does get more snow than most other parts of the Dolomites, including the Sella Ronda. As with all ski resorts in the Dolomites resorts, snow-making is also state-of-the-art, meaning that snow cover is pretty much guaranteed. 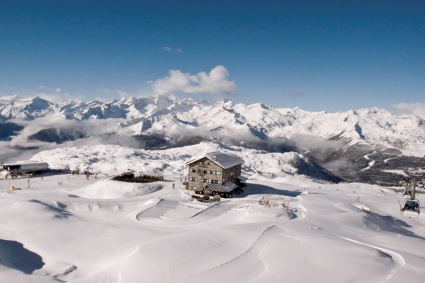 Madonna di Campiglio has a higher snowfall average than most other ski resorts in the Dolomites.

Where to find the best snow in Madonna di Campiglio

The best snow quality in Madonna di Campiglio is normally found in the Grostè sector which is north-facing and reaches almost 2500m. This is also the area to head to during warmer weather later in the season when slush becomes much more of an issue on the Cinque-Laghi-Pradalago-Monte Vigo side, which is more exposed to the sun.

Bad weather is unlikely to disrupt your skiing in Madonna di Campiglio as its ski area has lots of trees on the lower halves of all of its sectors.

While Madonna di Campiglio has a number of black runs, the skiing here is generally considered to be limited for advanced and expert skiers. The steepest run in the ski area descends the front face of Monte Spinale and there are also some challenges in the Pinzolo area. However, note that off-piste is banned in the whole of Madonna di Campiglio’s ski area, as it is in much of Italy. 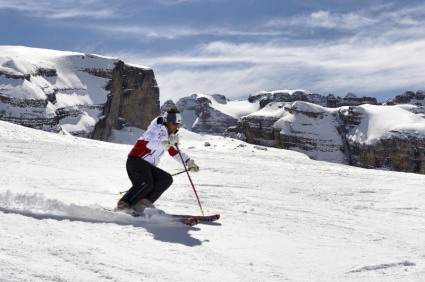 While Madonna di Campiglio does have a number of black runs, it is not the best ski resort in the Alps for experts.

Madonna di Campiglio is an excellent resort for intermediate skiers, especially those who enjoy gentle cruising, with lots of easy runs in all sectors. Some of the gentlest pistes are found on the high open Grostè sector, but you will also find some long easy runs on the more tree-lined Pradalago sector.

More confident intermediates also have plenty of options, with steeper runs dotted around all of Madonna’s sectors, the best of these being on the front side of Monte Spinale, at Cinque Laghi, on the lower part of the Folgarida area and over in Pinzolo. 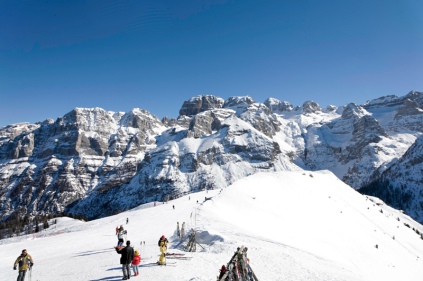 Madonna di Campiglio is an ideal ski resort for intermediates.

Madonna di Campiglio’s main nursery slopes are excellent but a short bus ride away from the village centre at Carlo Magno. There are also some excellent easy runs to progress to at both Grostè and Pradalago. 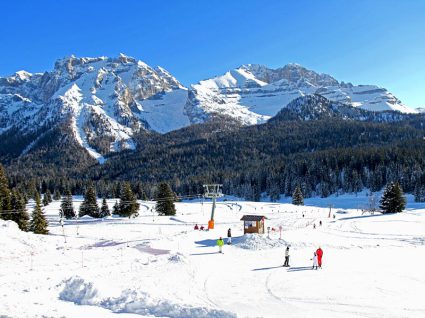 Madonna di Campiglio has excellent beginners slopes at Campo Carlo Magno, and lots of easy runs to progress to.

Madonna di Campiglio has 22km of scenic cross-country trails in the woods at Carlo Magno, a short bus ride away from the centre of the resort. 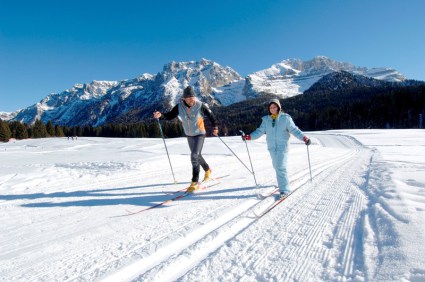 Madonna di Campiglio has a number of good mountain restaurants dotted around its slopes.

At the top of Pradalago, the Rifugio Viviani is recommended for great service and food, as is the Cascina Zeledria a little lower down on the same mountain.

Over on the Grostè side, the Malga Montagnoli is recommended for traditional food, as is the Malga Vigo above Folgarida. 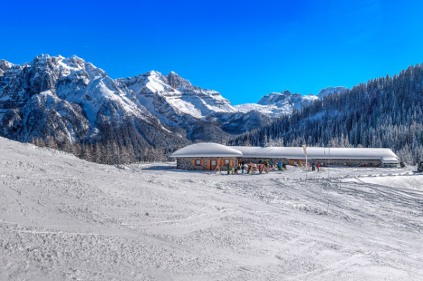 The Malga Vigo restaurant above Folgarida is a great place for traditional cuisine.

Madonna di Campiglio’s pedestrianised centre has an interesting array of bars, restaurants and boutiques and is a popular place for a late afternoon or early evening stroll. You can also skate on the resort’s frozen lake and there are some pleasant winter walks in the area. 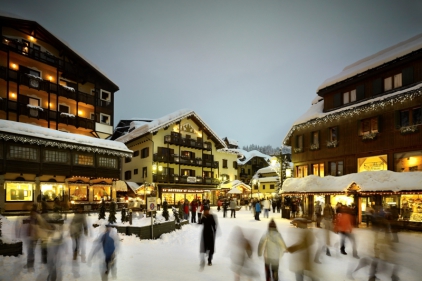 Madonna di Campiglio offers plenty of après-ski action, especially at the close of play. Among the livelier bars are Cafè Campiglio and Bar Suisse. Less obvious due to its side-street location but also highly recommended is Bar Dolomiti. Later in the evening Club des Alpes, Piano 54 and Cliffhanger are the places to be. 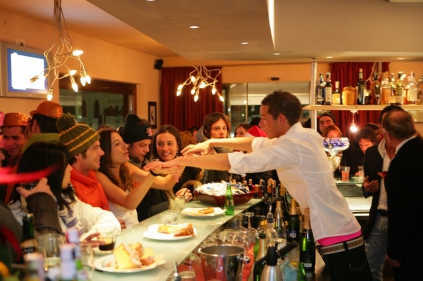 Madonna di Campiglio has a good variety of après-ski options.

Eating out in Madonna di Campiglio

There are plenty of good restaurants to suit all budgets in Madonna di Campiglio including three with Michelin stars. Among the better value recommendations are Le Roi and Antico Focolare while the Alfiero comes highly recommended for something a little more formal. 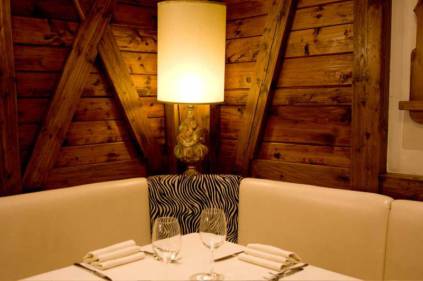 Cosy dining at the Antico Folare in Madonna di Campiglio.

Make sure you buy the full area ski pass if you are an even vaguely keen skier as it opens up so many more options through all of the links to outlying resorts.