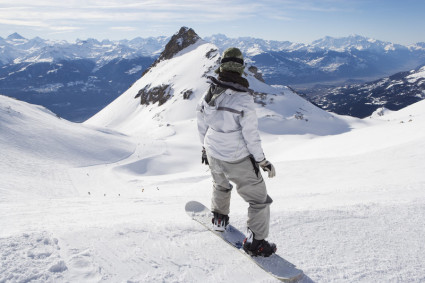 There's more to early season skiing than squeezing in a cheeky weekend in the run up to Christmas! The first non-glacial ski slopes can open as early as October and by late November/early December, lots of high ski resorts (and a few low ones) are at least partially operational.

Indeed, so adept are some resorts at snow-making, that a good number of slopes may open even before a single flake of snow has fallen. Nowhere is this better illustrated than in the Dolomites, where last December skiers in the Dolomiti Superski area (e.g. Selva, Corvara, Arabba) enjoyed hundreds of kilometres of perfectly maintained pistes, made entirely of artificial snow.

For those that just can't wait to hit the slopes, here is our must read guide to early season skiing in the Alps...

Skiing in September means skiing on glaciers but, with temperatures starting to drop, you might get lucky and experience fresh snow. For serious skiers we recommend Hintertux (Austria), where the glacier is steeper and more varied than most. Zermatt and Saas-Fee (Switzerland) are other possibilities – they would certainly make livelier bases – but here the glaciers are very gentle.

October sees more and more glaciers open up - and, in good years, the first non-glacial terrain too. For keen skiers, Hintertux (Austria) remains one of the best options, but Sölden (Austria) also offers plenty of variety with its two extensive glaciers. Other recommendations within our programme include Tignes (France), Zermatt and Saas-Fee (Switzerland) and Cervinia (Italy).

Mid November sees a clutch of big name resorts fire up their lifts for the first time, including Val Thorens (France), Obergurgl and Ischgl (Austria).

For serious skiers, we also recommend you consider Sölden (Austria), Cervinia (Italy) and Tignes (France). Snow conditions may already be excellent at altitude (as they were in 2012 and 2013) but, even if the natural stuff is in short supply, these all have enough artificial help to virtually guarantee some decent piste skiing.

Although a few smaller ski areas don’t open until Christmas week, most remaining ski resorts aim to open up early to mid-December, depending on snow conditions.

Lots of resorts have the potential to offer great skiing at this time but, glaciers aside, our pick of snow-sure December ski resorts would have to include Val d’Isère, Tignes and Val Thorens (France), Cervinia (Italy), Warth-Schröcken, Lech-Zürs, Sölden, Ischgl, Obergurgl and Obertauern (Austria).